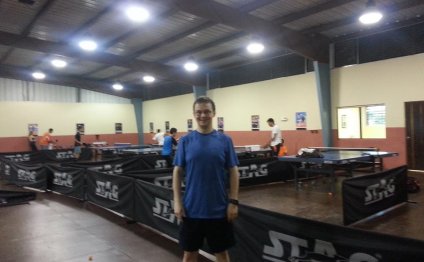 The Austin Table Tennis Annual General Meeting was held on 5/29/2014 at 7pm with approximately 25 people in attendance. Below is a summary of meeting discussion as recorded by Marguerite (and paraphrased by Roderick).

1) Rick announced that all current officers are continuing with their current posts. There were no candidates to run against them so they continued without an election.

2) Dwight gave a financial overview of the club. In summary, the club's is making a net income from month to month that has been increasing over the past year. This increase is driven largely by increases in monthly dues as well as other programs throughout the club. The club spent about 1/3 of its cash reserves on the new floor and there was some debate about adding a further epoxy coat to the floor at a later date.

3) Yang spoke about the various coaching programs at the club. We have a Junior program that is bringing Table Tennis to some local school districts, youth camps, annual youth tournament, many adult level training options, and free coaching.

Yang is very passionate about promoting table tennis and it is bringing a lot more members to the club. His Monday night free coaching has been showing results by bringing in many new people and helping folks who otherwise would not be able to afford to try out quality coaching.

Yang will hold table-tennis-related lectures and clinics in the future on various topics of interest to public.
High level youth development preparations are being made for when a very talented student is found. He is looking for business partnership to help sponsor talented youth. Support from the board and Marguerite is great so far.

4) The floor improvement project went very well and is a vast improvement. Lots of volunteer helped get it done rather quickly. It was agreed that the club will likely want to add more epoxy to the floor but it was decided to wait at least a few weeks before doing this. There was a lot of spirited debate regarding using red colored epoxy for the additional layers versus more clear coats. There will likely be a vote in the near future where all qualified voting members of the club will be invited to help decide on this issue.

5) Roderick and Rick are working on a revamped league program with Roderick taking over for Rick as the new league director. Full details on league page of club website. USATT Railstation changes in coming months might affect league in the future.

6) Joel H talks about players playing with better players often so lower players can improve and was willing to help organize this. Club will publicize Joel's idea once he has a solution to present.

7) Tuan brought up three man team league and possibility of a rotating special program such as that which brings more excitement. We still need a volunteer to spearhead this. Roderick may set up the next team league once current one ends.

8) League related feedback form is available on our website. It goes straight to league director (Roderick) and is important for keeping the league relevant to its members.

9) There was a reminder that our bylaws allow members to petition the board to make some change in the club.

11) Some sort of blog/forum for members to talk about feedback and suggestions and whatnot is desired.

12) Phil is working on a Google group that should help with the desire to have a forum.

13) Thursday night is more for beginners and there was a desire for a more just-for-fun sociable event at the club versus competitive league.

14) Challenge system could use improvement. For now members encouraged to make friends and find practice partners with their own efforts...