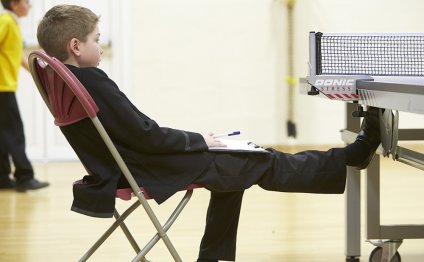 The upper surface of the table, known as the playing surface, shall be rectangular, 2.74m long and 1.525m wide, and shall lie in a horizontal plane 76cm above the floor.

The playing surface shall not include the vertical sides of the tabletop.

The playing surface may be of any material and shall yield a uniform bounce of about 23cm when a standard ball is dropped on to it from a height of 30cm.

The playing surface shall be divided into 2 equal courts by a vertical net running parallel with the end lines, and shall be continuous over the whole area of each court.

For doubles, each court shall be divided into 2 equal half-courts by a white centre line, 3mm wide, running parallel with the side lines; the centre line shall be regarded as part of each right half-court.

The ball shall be spherical, with a diameter of 40mm.

The ball shall be made of celluloid or similar plastics material and shall be white or orange, and matt.

The net assembly shall consist of the net, its suspension and the supporting posts, including the clamps attaching them to the table.

The net shall be suspended by a cord attached at each end to an upright post 15.25cm high, the outside limits of the post being 15.25cm outside the side line.

The top of the net, along its whole length, shall be 15.25cm above the playing surface.

The racket may be of any size, shape or weight but the blade shall be flat and rigid.

At least 85% of the blade by thickness shall be of natural wood; an adhesive layer within the blade may be reinforced with fibrous material such as carbon fibre, glass fibre or compressed paper, but shall not be thicker than 7.5% of the total thickness or 0.35mm, whichever is the smaller.

1 Ordinary pimpled rubber is a single layer of non-cellular rubber, natural or synthetic, with pimples evenly distributed over its surface at a density of not less than 10 per sq. cm and not more than 50 per sq. cm.

Sandwich rubber is a single layer of cellular rubber covered with a single outer layer of ordinary pimpled rubber, the thickness of the pimpled rubber not being more than 2mm.

The covering material shall extend up to but not beyond the limits of the blade, except that the part nearest the handle and gripped by the fingers may be left uncovered or covered with any material.

The blade, any layer within the blade and any layer of covering material or adhesive on a side used for striking the ball shall be continuous and of even thickness.

Slight deviations from continuity of surface or uniformity of colour due to accidental damage or wear may be allowed provided that they do not significantly change the characteristics of the surface.

At the start of a match and whenever he changes his racket during a match a player shall show his opponent and the umpire the racket he is about to use and shall allow them to examine it.

Definitions Used In These Rules

A rally is the period during which the ball is in play.

The ball is in play from the last moment at which it is stationary on the palm of the free hand before being intentionally projected in service until the rally is decided as a let or a point.

A let is a rally of which the result is not scored.

A point is a rally of which the result is scored.

The racket hand is the hand carrying the racket.

The free hand is the hand not carrying the racket.

A player obstructs the ball if he, or anything he wears or carries, touches it in play when it is above or travelling towards the playing surface and has not passed beyond his end line, not having touched his court since last being struck by his opponent.

The server is the player due to strike the ball first in a rally.

The receiver is the player due to strike the ball second in a rally.

The umpire is the person appointed to control a match.

The assistant umpire is the person appointed to assist the umpire with certain decisions.

Anything that a player wears or carries includes anything that he was wearing or carrying, other than the ball, at the start of the rally.

The end line shall be regarded as extending indefinitely in both directions.

At the start of service the ball shall be stationary, resting freely on the flat, open palm of the server’s free hand, behind the end line and above the level of the playing surface.

The server shall then project the ball near vertically upwards, without imparting spin, so that it rises at least 16cm after leaving the palm of the free hand and then falls without touching anything before being struck.

As the ball is falling the server shall strike it so that it touches first his court and then, after passing over or around the net assembly, touches directly the receiver’s court; in doubles, the ball shall touch successively the right half court of server and receiver.

The ball and the racket shall be above the level of the playing surface from the last moment at which the ball is stationary before being projected until it is struck.

When the ball is struck it shall be behind the server’s end line but not farther back than the part of the server’s body, other than his arm, head or leg, which is farthest from his end line.

It is the responsibility of the player to serve so that the umpire or the assistant umpire can see that he complies with the requirements for a good service.

If the umpire is doubtful of the legality of a service but neither he nor the assistant umpire is sure that it is illegal he may, on the first occasion in a match, warn the server without awarding a point.

If subsequently in the match a service by that player or his doubles partner is of dubious legality, for the same or for any other reason, the receiver shall score a point.

Whenever there is a clear failure to comply with the requirements for a good service no warning shall be given and the receiver shall score a point, on the first as on any other occasion.