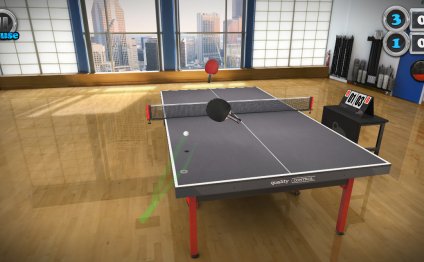 Use your skills to move the ball around the table to become a Table Tennis Champion!

If you absolutely LOVE ping-pong games and miss those nights back in the eighties and nineties when you played all night in your BFF's basement game room, then this is the game for you. I've only played the arcade and a few league games, but I think I have enough experience to tell how this game goes – on the basement level, of course! 😏 The thing I really like about the game is how it feels to play it. It feels very balanced, hand to eye contact works like it does in the real game, so you feel like you're really there in the game space (Playing it on an iPad Generation two).
Will I get bored eventually, or not be able to figure out the league stuff – maybe. But for now it's a great all–around two Dimensional substitute for the real thing.

One suggestion, you might want to make the background, paddles, and ping pong balls adjustable so the player can customize the interface of the game by changing colors of the paddles, balls, table, or even the whole environment. That might cut down on the boredom factor for those who have it. Endless possibilities of what you could do there.

Auntie Mame says Enjoy but don't step on the ping pong ball, that would be just ghastly!!! (if you haven't seen the film then you won't get that allusion so don't worry about it)!

This game was really fun at first, no lags, fun leagues, etc. Well the next day I play this game, it crashes. So I open it up again, it crashes. So I open it up again, and it worked. So I went to do my league and it starts to lag. I couldn't even play it was that bad. I'm kinda mad because this game was awesome but now it's just one of those games that just lags all the time. So I'm still thinking of deleting this game, but if it wasn't for the lagging, It would be a five star !!

I really like this game. I actually have a real ping pong table, but when my dad or brother is not around, I just play on this app. It's the next best thing. I recommend this app too 4 everyoneeee! It's really fun, realistic, and addicting.