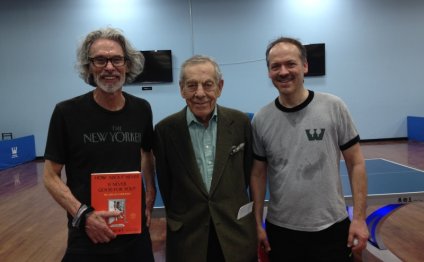 Ping-Pong's overall American popularity skyrocketed 35 percent between 2000 and 2008, according to the Sporting Goods Manufacturers Association. While the game counts simplicity among its chief virtues (the 17 million–plus stateside players need little more than a table, paddles and a ball for hours of fun), some of New York's top table tennis venues offer a sophisticated twist on the old standby with cocktails, music and dramatic lighting.

Exhibit A in this trend is SPiN New York, actress Susan Sarandon's high-class Flatiron District Ping-Pong lounge, whose September 2009 debut smashed the sport back into the public consciousness. SPiN holds frequent professional and open tournaments (see our listing for details), but also features disco lights, an on-site restaurant and even a $60, 000 steel table with a glass net. It's not your junior high school best friend's basement, that's for sure.

Holding down the fort for purists, the Upper West Side's modest Wang Chen Table Tennis Club is helmed by its eponymous 2008 US Olympian. It's the flip side of the racket from SPiN. There isn't enough display space for all of the trophies Wang and the club's patrons have won, so some are packed in a cluster on top of the soda machine. And the unassuming young women who often greet you at the front desk are actually some of the City's best instructors and hold impressive national rankings. During our visit, a businesslike employee took a seasoned regular through an intense footwork drill.

There's no music here, no bar and no flashing lights—but you're in luck if you want to seriously improve your game. Maybe that's why, despite a conspicuous lack of bells and whistles, Wang Chen Table Tennis Club has its share of high-profile fans. The narrow hallway leading to its register is lined with photos of Wang with Keanu Reeves, John McEnroe and other distinguished guests.

So is there a brewing table tennis rivalry? Not quite—the clubs see each other as complementary. SPiN, after all, has a large cast of professional coaches, and centers like Wang's thrive when more New Yorkers embrace the game. Wang uses the sport's newfound celebrity glow to sell it to newcomers.

"If you know how to play [table tennis], " she tells us, "you will play with Susan Sarandon. If you don't play table tennis, you will never meet her." Fame, fortune and better hand-eye coordination? We're convinced. So is Wang herself, who shared with us her hope to play a game with Sarandon.

The Austin Table Tennis Annual General Meeting was held on 5/29/2014 at 7pm with approximately 25 people in attendance. Below…