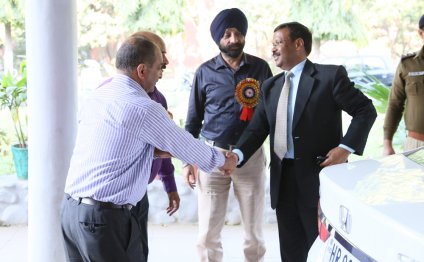 I believe Manuj Paliwal is correct. Awhile back rules were changed to make TT more appealing to TV viewers (I believe the primary reason). This included changing how games were scored and enlarging the ball from 38mm to 40mm. I suppose the rationale was that 21 point games took too long and TV viewers wanted quick fixes. The bigger ball was supposed to slow down the game and make it easier to appreciate.

In my opinion it's a real shame. When playing against a more unorthodox player, it can take time to learn their swing style and locations on the table they had difficulty defending. It was common to get 5-6 points behind before putting it all together. With an 11 point ceiling, you get that far behind and it's nearly impossible to recover. Which player is better, the one who is fortunate enough to overpower their opponent out of the gate, or the one who takes a bit of time, but then crushes their opponent once patterns and weaknesses are learned? Yes, matches can consist of 3-5 games, and that does offer some time to smoke out an opponent. But I prefer the longer game. As for the beach ball, it's a joke in my opinion. Players could do things with the 38mm ball that are impossible with the larger ball. It was as beautiful to watch as it was fun to play. Those in favor of slower exchanges to attract more TV viewers did not help the game or the viewership. Neither did those who shortened the game to 11 points. TT cannot be fully appreciated while viewed on a TV set. No matter how short the game or how big the ball. Neither of these moves helped. Badminton is similar. Both games are very, very fast, and to appreciate these games one needs to participate or be at the match. Or, be willing to watch in slow motion.

how to hit a table tennis ball (rules of the game)