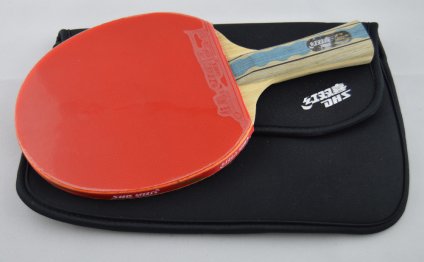 On a hot August evening in 2008, his tousled locks subdued by Beijing humidity, Boris Johnson seized the Olympic flag and uttered a rallying cry for London 2012 that will echo down the generations: "Ping pong is coming home".

One might not have expected his Chinese hosts to welcome those words. The world's most populous nation bestrides table tennis like a bat-clutching colossus, claiming all six medals in the singles and gold in both team events at the Beijing Games. But having produced the Four Great Inventions (paper, printing, gunpowder and the compass), it appears quite happy to give Britain the credit for a fifth.

"It's a fact. It's true. It was invented by England, " concedes Zhen Li, before adding: "But it was developed in China. And now the English can't beat us."

Double Happiness, Zhen's employer, has been there at every step of the evolution. Named by Zhou Enlai, wielded by Mao Zedong and stolen by the disgraced politician Bo Xilai, the company's bats and blades remain the weapons of choice for both park amateurs and global champions.

It produces 100, 000 tables a year, 3m to 4m bats and more than 100m balls. And as official Olympic table supplier, it has already shipped 70 of its finest examples (usually retailing at around £10, 000 a pop) to London: eight for competition and the rest for warm-ups, practice and as reserves in case of mishap.

Table tennis has come a long way from its origins, when squiffy Victorian gents – possibly officers serving in India – used cigar box lids to bat champagne corks at each other.

Two decades later, Mao declared table tennis China's national sport. Then, in 1959, China won the world championship. Zhou, the then premier, declared the year one of "double happiness": the 10th anniversary of the People's Republic and its first major sporting victory. The small Shanghai business was formally launched as the Double Happiness brand, now known in English as DHS.

Lou Shihe, the company's general manager, says: "When Rong Guotuan won the ping pong championships, it changed the Chinese image in the western world. Westerners used to have the impression of China as the 'sick man of Asia'. China promoted the sport as a political campaign. The government called for the whole nation to learn from ping pong players."

The Great Helmsman himself took it up – with a Double Happiness racket, says Lou – and even the youngest were encouraged to play.

"Regard a ping pong ball as the head of your capitalist enemy. Hit it with your socialist bat and you have won a point for the motherland, " the top athletes were exhorted.

When the Cultural Revolution convulsed China, Rong and two other national players were hounded to their deaths. But by 1971, the game was on the rise again, helping pave the way for the Sino-US rapprochement. An American team arrived to challenge Chinese players in the legendary "ping pong diplomacy" initiative, fought out on Double Happiness tables.

Table tennis was "the one and only" sport back then, recalls the Chinese poet and detective novelist Qiu Xiaolong, who now lives in the US.

"Those days, the top players all used Double Happiness rackets, the then top brand – at least so we learned in all the newspapers … For us, it was a valued possession, like luxurious brands such as Armani or Montblanc among the young Chinese materialists today, " he says.

His prized red racket was widely coveted; and, one day, borrowed by a high-profile schoolmate. The eager player was Bo, whose ousting as party secretary of Chongqing this spring was the biggest political earthquake in China for decades.

"That was the only encounter between me and Bo Xilai, " Qiu wrote recently. "I remember it not because his father was one of the most powerful Communist party seniors in the Forbidden City but because he never returned the racket."

You can pick up a Double Happiness beginner's bat for as little as 20 yuan (£2); but a professional level blade and rubbers – no serious player would buy a pre-assembled offering – costs 2, 500 yuan or so (£250). The finest are still made in the Shanghai suburbs.

Hundreds of collegiate table tennis players, coaches and fans may be seeing double for three days of exciting competition…