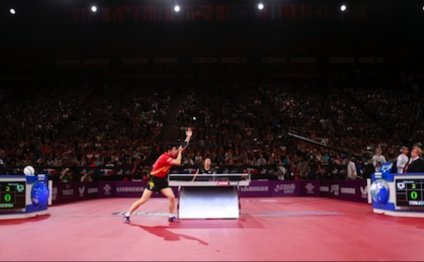 In the Open Singles preliminary round robin, 13 year old Alexander Bu (2331) caused one of the biggest upsets in the tournament, beating 4th seed Zirui Zhao (2625) 3-0 and rightly earned himself a place in the quarterfinal. The 13 year old then faced Mississippi College’s Cheng Li (2555), 2015 National Collegiate Team Champion, in an exciting match which started with Alexander taking the first game 11-9. A large crowd gathered to support the young Canadian junior star, but Cheng Li proved to be too strong, taking the next 3 games 11-5, 11-9, 11-5. Alexander then went on win the U-18 age event, and make the quarter-final of the U2500 and the semi-final of the U2400.

The Arnold Table Tennis Challenge has special meaning for the Bu family, as the family used to reside in Columbus until 2006 when they made the move to Canada. The family continues to have strong ties to the Columbus table tennis community and enjoys visiting their hometown for this event. Alexander’s matches throughout the weekend consistently generated large crowds, many from the local Columbus community, adding a heightened level of excitement to the competition.

Today, Alexander resides in Toronto where he trains at the (CCTTA) with Shen Qiang and other high level players. He has also recently started training with a private coach to further improve his game. The teenager competes in over 20 tournaments a year in North American and around the world, with the goal of achieving a top 15 ranking in the ITTF Under 15 World Ranking list. Alexander and his family’s commitment to table tennis has helped improve his game significantly in the past few years, making him one of Canada’s newest and brightest rising stars.

Coverage of the Butterfly Arnold Table Tennis Challenge and stories about the athletes is available at ButterflyOnline.com, or via Butterfly North America’s Twitter and Facebook pages.