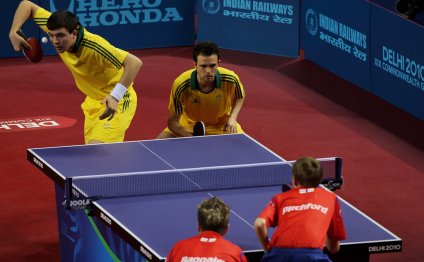 These pictures perhaps give some hint why, in the early 1900s, Russia banned the sport of ping-pong. Clinicians feared it could damage players' eyesight.

Indeed, it is a sport of fast and furious play, demanding superhuman reactions and fearsome capacity for focus. Any momentary lapse of concentration can cost players valuable points.

So it's no wonder these players, at the Commonwealth Games in Glasgow, are so intensely focused on those tiny, round plastic spheres. In them are concentrated all their dreams of athletic glory.

Scroll down for video

Eyes on the ball! Scotland's Corinna Whitaker looks like she's been suddenly distracted as she serves the ball during her match against Guyana's Trenace Lowe

Eyes on the prize: Canada's Pierre-Luc Theriault prepares to play a return to Gilton Chelibe Charlotte of Uganda

Numinous experience: Jersey's Craig Gascoyne looks like he's just seen God appear in the audience as he serves the ball to Shakirin Muhd Ibrahim of Malaysia

GImme a break: Erandi Warusawithana of Sri Lanka looks like she's explaining why she shouldn't have to tidy her room while playing against Malaysia's Ng Sock Khim

Don't blink! Left, Maldives' Aminath Shareef serves the ball to Uganda's Amina Lukaaya, who is pictured right, serving it back in the same qualification match

Don't let down the side: Angharad Phillips of Wales purses her lips with tension in a doubles match against Curtis Humphreys and Ashley Quashie of Trinidad and Tobago

Hold it in! Ghosh Soumyajit of India looks like he's strenuously delaying a visit to the toilet as he plays doubles alongside Ghatak Poulomi

An unfinished clown nose? Annie Yang of New Zealand appears to be wearing the ball as she serves the ball to Northern Ireland's Emma Ludlow

My style is the best: Ryan Jenkins of Wales, left, prepares to serve forehand. But Madhurikaa Paatkar of India, right, apparently prefers a backhand stroke

Please God, don't let me miss... Rohan Sirisena of Sri Lanka seems to be appealing for divine assistance as he serves against Gavin Rumgay of Scotland

Hungry for glory: Harmeet Rajul Desai of India looks like he's about to take a bit out of his paddle as he plays Quadri Aruna of Nigeria in the Men's Team Table Tennis Final

Table Tennis from the Commonwealth Games

Origins of Table Tennis As most would imagine, Table Tennis is based on Tennis - the only slight question might pertain to…