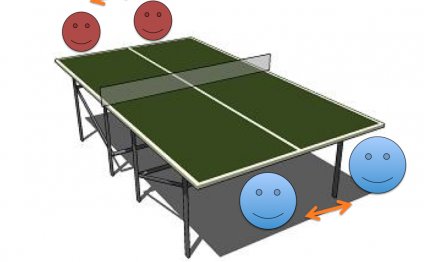 The doubles game is played the same way as singles game but there are some differences in the rules of the game.

In a doubles game a line is drawn along the axis of the table dividing it into two equal half courts, 3 mm wide which runs parallel with the side lines.

So what are the difference between a doubles games and singles game in table tennis?

There are differences in the order of play and in the serving rules from a singles game.

The first difference is that players must alternate shots. If one player of a doubles team plays the ball two times in a row, the team will lose a point.

This means that if in a match where there is player A and C versus player B and D, A is the server and B is the receiver.

The order of play will be Player A serves to Player B, Player B returns to Player C and Player C returns to player D. The rally will continue until a point is scored by either side.

(2) The Order of Serving

The serving sequence in doubles game is different from singles game.

In the doubles game the team that have the right to serve first decides among themselves which of them will serve, but this can only happen in the first game of the match.