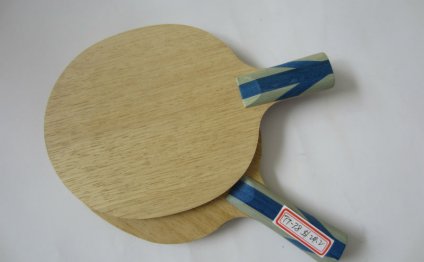 Patrick Hutchison has been doing freelance work since 2008. He has worked as a physical therapy aide and as a writer for various websites including Destination Guides and several travel-related companies. Hutchison has a Bachelor of Arts in history and anthropology from the University of Washington.

The best table tennis paddle is greater than the sum of its parts. Photo Credit Siri Stafford/Lifesize/Getty Images

Table tennis attracts participants seeking all level of competition, from high-intensity matches in the Olympics to leisurely hitting sessions in garages and game rooms No matter where you play - or whether you call it table tennis or ping pong - a good paddle will greatly enhance your game.

Unlike table tennis balls, which are rated based on a strict size and quality scale, the best ping pong paddles are not rated. This is because the best table tennis paddles are custom designed by individual players to fit their own playing styles. Players choose their blade - the wooden part of the paddle - and their rubber, and have a shop assemble the components to make a custom paddle. However, some preassembled recreational paddles are rated. These are often rated on a scale of 1 to 5 stars, with 5 stars being the highest rating. The ratings are displayed on the package, and usually on the paddle itself. Stiga is the most common manufacturer of rated preassembled paddles.

Rubber comes in styles meant to promote defense, offense and all-around control. Defensive rubbers will result in softer shots, more accuracy and control and the ability to reduce the spin your opponent puts on the ball. Offensive rubbers will hit faster, harder shots at the expense of control. All-around or control rackets provide a middle ground, with average speed, control, spin and power. Rubbers also come in two forms, pips-in smooth rubbers and pips-out rubbers. Pips are like small bumps. Pips-in mean the bumps face inward toward the blade of the paddle, and pips-out means they face outward. In general, pips-out is the best for control while pips-in, or smooth, is better for speed and all-around play.

Like rubbers, blades are generally grouped into defensive, offensive and control styles. Choosing a blade also means choosing a grip style, either shakehand or pen-hold. Pen-hold grips have a shorter handle than shake-hand grips, because less area is required for a proper pen-hold grip. Shake-hand grips place the paddle pointing upward in your grasped hand, while pen-hold has the paddle pointing down in your hand. Pen-hold grips are slightly lighter because of the decreased handle size. Neither style is better than the other; choose the style that is most comfortable for you.

One of the best table tennis players in the world faced a ...