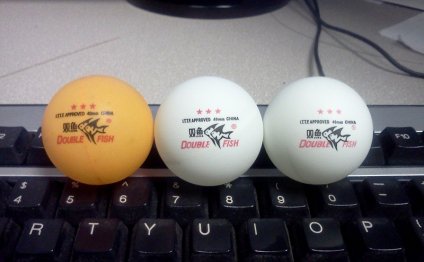 Hundreds of collegiate table tennis players, coaches and fans may be seeing double for three days of exciting competition in Wisconsin.

During that 2015 TMS Collegiate Table Tennis Championships, there will be plenty of Double Fish-produced balls flying around the venue for three days in Eau Claire.

Just watch carefully as collegiate stars like Lily Zhang of the University of California-Berkeley, Ariel Hsing of Princeton, Emil Santos of Texas Wesleyan, Michael Landers of New York University and Cheng Li of Mississippi College start slamming away. And keep your eye on the players when the barrage of small hollow balls come their way at rapid speeds.

From April 10-12 in the Diary State, Double Fish will serve as the official ball sponsor of the national championship games.

National Collegiate Table Tennis Association leaders are delighted to welcome the company aboard as a key sponsor starting with the 2014-15 season. The partnership will continue for the next two seasons as well.

The NCTTA agreement with Double Fish to serve as the official ball sponsor of the organization’s tournaments officially began on July 1, 2014. As a result, thousands of Double Fish balls have seen extensive use at divisional, regional and now national championship tournaments.

How many Double Fish balls are in use in NCTTA tournaments this season? Thousands!

The Double Fish balls have the approval of the International Table Tennis Federation.

Just how many Double Fish table tennis balls will be used at the championship games in Wisconsin?

There are 242 players and coaches coming to the tournament and there will be loads of games to play. So do the math. It’s safe to say that hundreds of Double Fish balls will be floating around the venue for players, whether they are practicing or engaged in intense competition.

Bella thinks the partnership with NCTTA will be solid for the next couple of seasons.

“We believe Double Fish will have good cooperation with NCTTA, ’’ she said. “We wish the players can enjoy table tennis with Double Fish products.’’

The 2015 TMS College Table Tennis Championships is hosted by the National Collegiate Table Tennis Association and the Visit Eau Claire and is one of the premier table tennis tournaments in North America featuring 6 events: Men’s and Women’s Singles and Doubles, and Men’s/Coed Teams, Women’s Teams. The event is sponsored by TMS International, Double Fish, Joola and PepPod.

Players and spectators alike will enjoy a jam-packed weekend of table tennis at the TMS College Table Tennis Championships. The event starts Friday April 10th and continues through Sunday April 12th at the University of Wisconsin-Eau Claire campus.

The National Collegiate Table Tennis Association (NCTTA) is a non-profit organization established exclusively for promoting the sport of table tennis at the college level. As the national governing body for college table tennis in the United States and Canada, NCTTA organizes intercollegiate competition throughout North America. www.nctta.org

Headquartered in Colorado Springs, USATT is the national organizing body for table tennis in the United States, serving 9, 000+ members and nearly 300 clubs. USATT sanctions 200+ events a year including the US Open and US Nationals. USATT is affiliated with the International Table Tennis Federation (ITTF), as well as the United States Olympic Committee (USOC).