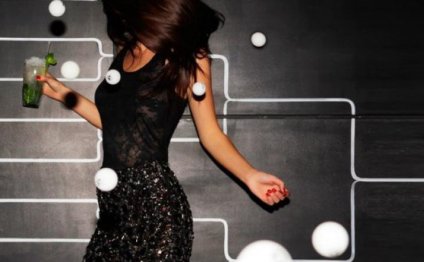 By 6.30pm, the venue, which also has a restaurant and large bar, is heaving. Some ping-pong players are novices, holding the bats as if in an egg-and-spoon race; others are already working up a sweat and showing off with twizzly serves and flamboyant smashes.

Adam Breeden, co-founder of Bounce, says the way the game has taken off is “phenomenal”. “We knew it would be popular but it has exceeded our expectations.”

Bounce is just one of a small but growing number of venues championing the sport, which started out as a Victorian parlour game and expanded into a tool for international Cold War diplomacy.

Ping, in Earls Court, west London, takes credit for getting there first, opening as a pizza- restaurant-cum-table-tennis-venue in July – a pizza-pong, or ping-parlour, if you will. (Though I feel it would make more sense to combine Chinese cuisine and table tennis. Then you could have ping-pong-dim-sum. It has a ring to it.)

The co-founder of Ping, Jonny Boud, who previously ran nightclubs, says he noticed people on a night out had stopped going to both a restaurant and a club during the recession. “They’ve wised up to the expense of it. We wanted an excuse for them to stay in the same venue and have fun. And it is such a sociable game.

“There is nothing worse than those pool bars, where the guys are all playing pool and the girls are standing around and watching. With ping-pong, the girls can take on the boys and beat them.”

Bars in Newcastle, Manchester, Bristol and Brighton have also woken up to social ping-pong and are running weekly or monthly events which combine spinning discs and little spinning balls. Both Bounce and Ping plan to expand beyond the capital.

As is so often the case, the phenomenon started in New York, with a club called Spin, backed by Susan Sarandon, the Hollywood actress and self-described “ping-pong propagandist”.

One British company has already developed a high-concept variant called Ping Tron, which involves playing in a blackened room with UV lighting and glow-in-the-dark bats and balls. Part rave, part sport, it is a decidedly odd idea. But it proved a hit at music festivals this summer, where the company set up its special temporary dark room outdoors.

Ping-pong’s comeback is a world away from the origins of the game, which started as an after-dinner competition for those born a century too early for the rigours of voting for X Factor contestants. It was elegant fun for the late-Victorian upper-middle classes, who took leisure very seriously.

No one is more thrilled about the revival, in whatever psychedelic form it takes, than Joe Jaques, the eighth generation to run the games company that bears his family name. Jaques of London started off making ivory chess sets in Hatton Garden in the late 18th century before progressing on to croquet, tiddlywinks, Ludo, and ping-pong, which it claims to have invented, or at least codified and commercialised, in 1891.

Jaques Junior is not surprised it has become a hit once again. “It is so accessible and easy to play. You can get the basics within three seconds and, once you start playing, you are infected.”

In a wonderful piece of serendipity, Bounce is situated in the basement of a building that used to house Jaques’s headquarters, until the company was bombed out during the Blitz.

“I’m not exaggerating to say it brings a tear to my eye to think they are playing ping-pong on the site where it all started, ” he says.

And it makes sense that the game has moved from people’s dining rooms to nightclubs, says Breeden at Bounce. “Space in people’s homes has shrunk.”

A table can cost well in excess of £300, twice the price and 100 times as bulky as a Nintendo Wii or Xbox. This partly explains why those looking for a fun night out have embraced the game so enthusiastically, even if they have to pay £26 to rent a table for an hour at Bounce. The main reason, though, is that ping-pong is absurdly good fun.

Val Moore tells me she hasn’t played since her youth club days, and I haven’t played since an overly competitive family holiday two years ago, when a brother-in-law set up a table-tennis ladder in a bid to humiliate his nephews and nieces.

But within minutes I am slicing, dropping and smashing as if a gold medal depended on it – and working up an appetite for a pint. To add to the thrill, we are playing on one of the tables used at the London 2012 Games, bought by Bounce at the post-Olympic auction.