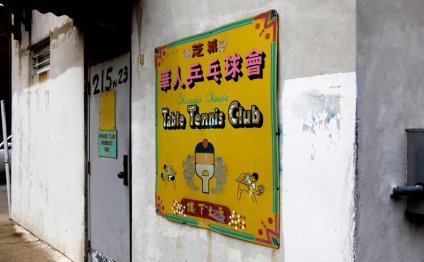 Trey Runcie’s obsession with table tennis started last year when his employer bought a Ping-Pong table for the office. The 38-year-old Web developer from West Town figured a lesson might give him a leg up on his coworkers. So he wandered into the Chi-Slam Table Tennis Club, an unassuming graystone storefront wedged between a phone card shop and a used-furniture store on West Chicago Avenue.

It was late and the club was empty, save for one other player and Ardy Taveerasert, the director. “I told Ardy I might be interested in taking a lesson, and he gave me one right there, ” Runcie says. “My first impression was that serious people play table tennis here.”

Taveerasert, a compact Thai immigrant in his 40s who owns a flower shop, learned the sport as a boy in Bangkok. He and his older brother cut paddles out of wood and rallied on a concrete table in the alley behind their house, not infrequently catching the ire of the local beat cops. It took Taveerasert just a few months of practice until he started beating his brother. Before long he was king of the neighborhood. “I never give up, ” he says. “If I lose to you today, tomorrow you’d see me show up again. You’re going to see me keep playing and playing.”

He joined Chi-Slam shortly after it opened in 2004. Two years later, he was running it. A teacher certified by USA Table Tennis, he has attracted disciples such as actors Vince Vaughn and Jennifer Connelly, who studied with him to prepare for a scene in the 2011 movie The Dilemma. “Beat me and then I’ll hire you, ” he recalls Vaughn saying. It was a shutout.

The popularity of table tennis today is a far cry from what it was in the 1950s, when Chicago was home to two popular Ping-Pong clubs: Stay and Play in the Loop and Net and Paddle in Uptown. The latter attracted the nation’s top players, many of whom competed in international tournaments. A 1957 Chicago Tribune story quoted a man from Kenosha, Wisconsin, who made the 120-mile round trip each night to play with Net and Paddle’s “topflight paddle wielders.” Both clubs have long been shuttered.

ITTF praised in Korea 9/4/2004 The ITTF had another successful Olympic Games in Athens. It is clear that the ITTF is on the…

Question: Can I Volley the Ball in Table Tennis/ Ping-Pong? Question 1: On a return can you hit the ball directly out of…