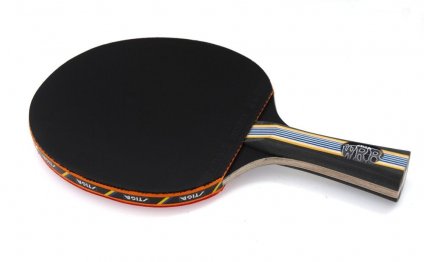 Rated 4.4 out of 5 by by GatorRoeder New Favorite I am a recreational player that has been playing for three decades and rarely find a worthy competitor. I have never invested much in my paddles because I never had a reason to. I paid $13 for my previous favorite paddle that I have been using for over a decade. My teenage son finally became a worthy competitor and I decided to try new paddles to increase my advantage. The first two high priced paddles I bought I instantly took a dislike to and went back to my old paddle. Out of the box, I knew this was different. There is no doubt this paddle has improved my game. This paddle is my new favorite, and I have been undefeated since I started using it. November 22, 2015

Rated 5 out of 5 by Snurko Very good racket Played several times against opponents who have the same racket. It was fun experience. We are recreational players with some experience and knowledge about table tennis. Spinning and curving are good, speed is ok. Much better then Stiga Sabre racket which I also have. January 13, 2015

Rated 5 out of 5 by TW Awsome Racquet The best racquet I have ever used!! This racquet givesyou the touch and the power to make every shot. It is just so much I can do with it. March 5, 2014

Rated 5 out of 5 by WILL Excellent excellent service!Fast delivery!!I recommend this Paddle.If you want to take Table Tennis to the next level... July 5, 2013

Rated 2 out of 5 by mau-lin Poor Too cheap not good quality like my hand made one. Price isnt bad though. I prefer gettting a bamboo one even though they are about 600 plus american dollars. June 27, 2013

Rated 4 out of 5 by VB All Round Paddle All Round Paddle. Speed is as good as Mark-V rubber blades. Only thing it miss is a stickiness on the rubber. Ball does not hold enough on the paddle. March 1, 2013

Rated 2 out of 5 by Clay Worthless The rubber is already falling off, can't believe I spent 70 bucks on this awful product . January 16, 2013