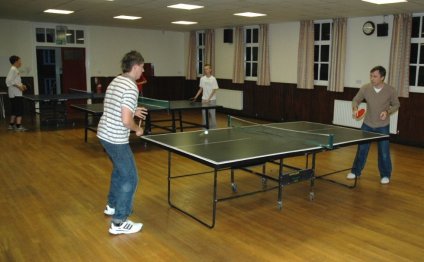 As of 3/18/2016, Marguerite Cheung is the ATTC League Director. Please contact her if you would like to help out with this largely volunteer effort for the betterment of the club!
The Rules of League

a. Each league night registration period will go until 7pm or until the 31 participant limit is reached, whichever comes first. Players who cannot show up by 7pm are strongly encouraged to call ahead to ensure their place in that evening's league. League will begin by about 7:10 as the draws are completed from the registered participants.
b. Rating limits will be set for each league night and will be strictly followed. There will be considerable overlap between groups such that most people will be eligible for 2 league nights to allow for as much flexibility as possible. See league eligibility link on league page to find out which league night(s) are for you. League rosters will be printed at the club and available on the league page at the beginning of each week and will be the official guides for league eligibility. Minor exceptions can be made if a player is close to the borderline and the club is not particularly crowded. Unrated players can also present USATT ratings or estimate their own rating on their first visit to determine eligibility.

c. A "League Captain" will be responsible for doing the league draws and initiating the League each night. These people are volunteers and often will play league on the night they are captains. Usually the draws will group people together as closely as possible by similar rating level. However, on the first full (Tues-Thurs) week of each month, we have "mixed-rating" league that draws groups with more spread ratings. This is done for variety and players with very different ratings can use provided handicap charts to play a competitive match that does not count for league points.

d. The club will devote up to 9 tables to league play each night. On a full night there will be one group of 10 people on 3 tables and three groups of 7 people on 2 tables each. If the league has not reached its maximum capacity by 7pm, less tables might be allocated at the League Captain's discretion.

e. If someone wishes to join a league group after 7pm that has not signed up, it is at the League Captain's discretion. Otherwise, one of the initial members of that group must have already stopped playing for the night. We have to be fair to those that registered on time. This method is also how members who have finished their groups can join another group. You can add your name to an empty row of the league sheet and begin playing matches. If the sheet has 10 names already, begin a new sheet or use the "extra results" section of the sheet.

f. If players have a dispute, some attempt should be made to resolve it themselves. If there is an immediate need for mediation, first look for a League Captain unrelated to the dispute. If no League Captain is available, contact the club host. If the issue is not urgent then use the league feedback form on this page. Unsportsmanlike behavior will not be tolerated and may result in a person being banned from league play depending on the problem caused.

a. League is a free service to players who have already paid for membership or club entry. The official League Roster is maintained by the League Director with the goal of including all players that have played in the past year.

b. Once a player is in the league Roster, their match records will be forever in the USATT League Records regardless of whether a player is in the active roster. Therefore, players whose "active" status has lapsed can still come back to league and pick up where they left off.

a. In addition to the regular league nights, players are welcome to play league matches at any time or place of their choosing and report the results for entry into the league system. These results are counted the same as a league match played on an organized league night.

b. Players must agree prior to the start of their match whether a match will be a league match and both players must already be league members.

c. Extra results should be submitted via league director email in the format "Player X Beat Player Y on Date Z". Alternatively, those results can be written on the "extra results" area of a normal league sheet on a league night and they will be processed when that league sheet is recorded.

a. Roderick Medina is League Director, a position previously held by Club President Rick Mueller. The League Director is responsible for ensuring the smooth operation of the league nights, the processing of results, and the ongoing maintenance of the league program itself.

b. Volunteers for league duties are always appreciated. If you would like to help with the league, we can find a way for you to help according to your schedule and provide any necessary training. Contact the League Administrator for more details! The primary positions needed are result recorders and League Captains. Result recorders help maintain the league roster and record match results in the USATT League System for automatic rating updates. League Captains create draw sheets and initiate the individual league nights. Only one League Captain is needed per night but it will help the program if many of us are trained for it.

c. Feedback is encouraged and should be submitted via the league director email on league page. This program exists to serve its members and would not be doing its job if member issues were not being addressed. There is also a google group with discussion forums and all league players are encouraged to join.

d. The league page on the Austin Table Tennis website will be the go-to place for league news and information. Any changes to league format will be announced a week in advance on the website. Any emergency changes such as league cancellations due to club closure will by posted as soon as possible. It can be easy to miss minor changes in the website so all players are encouraged to join the league google group to be notified of new league developments.

Want to learn how to play table tennis? Well I ve got some great tactics, tips and techniques to help you by courtesy of…

Table tennis, also known as ping-pong, is the second most popular game in the world as well as the newest of the world’s…