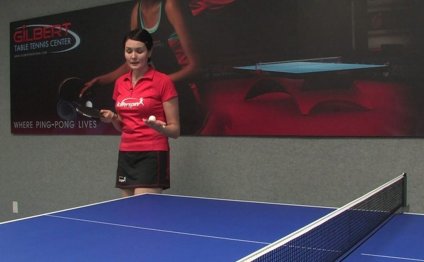 Rules of serving in Table Tennis

It is the act that initiates a rally in table tennis. It is the first stroke of each point. Some simply put the ball into play with a no frills, basic approach. Others vary the spin, speed and placement and use it strategically to dictate the action and induce their opponent to make a mistake. The serve in table tennis has evolved through the years as the sport has grown in popularity and rules have changed. It is interesting to note that the rules of service are one of the most often violated/least enforced rules in table tennis. Illegal serves are especially prevalent in smaller, local tournaments, but also do occur with regularity at the professional level. It is a problem that is often overlooked and it is everyone’s fault, from you the player, your opponent, to tournament organizers as well as referees and umpires.

The full, word-for-word explanation of the rules for legal service can be found in the International Table Tennis Federation (ITTF) Handbook – Laws of Table Tennis, Section 2.06 (The Service). In six easy steps, here are the keys to a legal serve in table tennis:

1. The ball rests freely in the open palm of the hand

Usually, you will see your opponent simply pick up the ball and immediately toss it, without pausing or allowing the ball to rest freely. Or the ball starts from the resting position in the server’s fingers, rather than palm. These two are the most frequent violations of this aspect of legal service. Here is a demonstration of how to do it correctly:

2. The ball is projected near vertically, at least 16 centimeters

This part of the rules seems to be the most often violated by players at all levels. Either the toss is not high enough or not vertical. Non-vertical tosses can be seen when a server tosses the ball back towards his or her racquet. For a great example of a non-vertical toss that hardly ever gets penalized is Russian table tennis professional Alexander Shibaev. Compare Shibaev’s poor toss to Kenta Matsudaira’s excellent toss in their recent World Cup match. I am at a loss as to why the umpire in this match did not consistently call a fault for every one of Shibaev’s awful serves. Here is a demonstration of how to do it correctly:

3. The ball is never obstructed by the free hand or free arm (or any other part of the body)

Another way to look at this is from your opponent’s perspective. He or she must be able to see the ball at all times, from the time it is presented in the server’s open palm to the time the server strikes the ball. Old timers may still serve the way they used to before the ITTF changed the rules in September 2002 – the good old ‘under-the-arm’ method, that was employed to devastating effect by players such as Liu Guoliang. In a pre-September 2002 match against Jan Ove Waldner, watch these two legends serve under the arm – legal at the time, but not legal any more.

The ITTF Laws on Service (2.06.05) define an area that must not be obstructed at any time: “The space between the ball and the net is defined by the ball, the net and its indefinite upward extension”. The shape described is a triangular prism. To simplify, take the ball at any time during its flight and draw an imaginary line from the ball to the two net posts. These two lines, plus the length of the net is your triangle and the area above it is the “indefinite upward extension“. Do not obstruct this defined area.

And of course, here is a demonstration of how to do it correctly:

4. The ball remains above the table and behind the end line prior to striking

From the start of the serve and while the ball is in flight and until it is struck, at all times, the ball shall be above the level of the table AND behind the end line. Here is a demonstration of how to do it correctly:

5. The ball is struck as it is falling

Falling is defined as the downward motion of the flight of the ball after it has reached the apex of its flight. The server must strike the ball during this downward motion. Also worth noting here is that the ball must not touch anything from the time it is released to the time it is struck by the server’s racquet. So if your shirt, shoulder, head, hair or anything else touches the ball during this time, it is an illegal serve and a point to your opponent. This actually happened to Wang Liqin in a match against Wang Hao at the 2007 Japan Open. On Wang Liqin’s toss, the ball made contact with his shirt. Showing a high level of integrity, he called a fault on himself because the umpire did not see the fault. Here is a demonstration of how to do it correctly:

6. The ball touches the server’s side, passes over (or around) the net assembly and touches the receiver’s side

After you’ve presented and tossed the ball properly and struck it during its downward motion and not obstructed the view of the ball at any time, the ball must first touch the server’s side of the table, then pass over the net (or around the net posts) without touching any part of the net assembly, and finally touch the receiver’s side. Here is a demonstration of how to do it correctly:

Finally, here is a full speed/slow motion demonstration of a legal serve, from start to finish:

So there you have it, in six easy steps. You can watch the video in its entirety at Edmonton Table Tennis Club’s Youtube channel. This article did not discuss the “why’s” of the rules of legal service. As I mentioned previously, the ITTF changed the rules for service in September 2002 to the current ones that we just went over. To get a good idea on why the rules are the way they are, check out this article at All About Table Tennis.com.

what does encantado mean When can a dog start learning tricks Tips on how to swi what does deported mean How to make candied pecans? Smoothing the earnings could be an example of which ‘tricks of the trade’ method? How much does it cost to make an iphone? what does coolant do Stressed out: how mind playing tricks on me gave anxiety a home in hip hop How to fix tmj? what does prn stand for what does the inside of a tornado look like How to clear using after css tricks How to crack lower back How to sell feet pics online How long to fast before blood test what phones are compatible with qlink what does a dying person think about what does a normal puppy belly look like How to get rid of a tan? what does zenith mean what are swollen legs a sign of what does hasty mean How to measure bust size what do zodiac signs mean what does koon baya mean How to print at staples Pathfinder how many tricks How to get gas out of stomach A. what tricks does carlotta perform or talk about? How to get facebook likes: tricks and tactics My dog constantly does tricks for treats by herself how do i stop How to take off dip nails with tips at home How to reset google home mini what are the sacraments what does nnn lease mean what does timothy mean what are the dimensions of a 65 inch tv How to do tricks on the acro bike what's it mean when you dream about snakes what does s/u mean How to make ribbon bows what does gen mean on grindr How old do you have to be to get cdl How to cook canned black beans? what does zany mean what does trout taste like How to do nerf slingfirr tricks Minecraft galactic how to build a moon base tips tricks How to make paracord bracelet How to factory reset ipad when locked out How to change the tips in channel lock snap ring pliers what does sodomising a woman mean How much to save for retirement? How to do easy magic tricks with paper Tips on how to run longer what are signs of multiple sclerosis How to do tricks on the dick what is a black flag mean How to lower blood sugar immediately? How to resist the tricks of the devil what position does kevin durant play How to make frosting with powdered sugar? what does vassal mean How to turn off suggested posts on instagram? what does amplitude mean What are the sizes for pen tips what does on point mean How to start a non profit? How to do a front flip How to turn off tips in overwatch Why fluorescent lights affect magic tricks What does you can't teach an old dog new tricks what time does wendy's serve lunch what does wth mean Card game, how to take tricks How to change apple watch face? How to get your taste back instantly? If school was a game what would be the loading screen tips? what are needs what does the name kaylee mean what does pushin p mean slang How much to paint a house what does myopia mean How to get rid of a sore throat fast at-home? How to go private on twitter? How to know a person's sexual tendencies with psychology tricks How to wash sneakers Tips on how to improve the ability to say noin the work How to dissolve blood clots naturally Tips on how to sell stuff at home Windows 10: microsoft creates how-to tips for operating system's anniversary update How to screen record on iphone 12? How to check status of tax return? How to get pregnancy tips what does faith mean in the bible How to get filter tips out of cigarette what does hooker mean How long does it take to renew a passport? What kind of cues have screw tips? How to fake location on iphone? what does cba mean in texting what are the long-term side effects of losartan How many days to thaw a turkey Css tricks how to style side by side text and image what does avow mean what does meraki mean How to clean my ears without q tips what are the mid atlantic states How to memorize lines acting tricks How to stay hard after you come? what does pts mean what does a renewed phone mean How to screenshot on windows laptop How do i transfer everything from my old phone to my new phone? Www.nomadicmatt.com/travel-tips/how-to-find-a-cheap-flight/#direct' How to make jambalaya? How to cure eczema permanently?
Source: ettcblog.wordpress.com

What are the rule to serving in table tennis

This stroke is the first forehand topspin stroke taught to the beginners. Offensive players use this stroke in order to prepare…