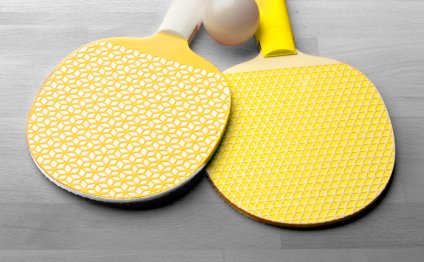 At least eight players are needed for this game. Two players start on the baseline, the back line of the tennis court, of each side with the court split in half vertically. Two tennis balls are played simultaneously on each half of the court starting with a drop hit. A drop hit is an underhand hit by bouncing the ball first. Once one player loses a point on his or her side of the court, they call out “One ball live!” and the single remaining ball is played out among the four players with the court no longer split down the middle. The team that wins this point stays, while two new players on the other side replace the losing team and the game starts over with two balls. The first team to reach ten points wins. This game is designed for use in practicing groundstrokes, the forehand and backhand, at first and then doubles strategy once "One ball live" is called.

This game format can also be used when the number of players drops to 4 in the game "Around the World". At least four players are needed for this game. Players are split into two teams. Each team lines up behind the middle of the baseline. One player from each team will start the game off and step up to the baseline. Either player can start the point. Once a player has hit the ball, he or she goes to the end of their line and the next player in line will hit their team’s next shot. The same happens for the other team. The rally continues until one team makes a mistake. This version is designed to work on consistency in the players ground strokes.

Relay / Tag Tennis is a tennis game that encourages teamwork and participation at all levels. It can be played as singles or doubles, on any size of court and at any level of play.

Players are split into two teams. Each team lines up behind the baseline, or somewhere on the court that is safe. One player from the serving team starts the game and plays the point according to existing and traditional rules and etiquette of tennis. Every player or doubles pair plays out at least one whole rally. Once a player has played their rally/rallies, they go to the end of their line and the next player in line plays their team’s next point/rally.

Scoring can be traditional (15/30/40/Deuce/Advantage/Game), Tie Break, Ping Pong or any net/wall game scoring format. To ensure every player/doubles pair faces every opponent player/team, when the number of players/teams on opposite sides is equal, the serving team should stay on for two points/rallies, while the receiving team stay on for one point/rally.

Any existing tournament and league competition infrastructure can be used to run a Relay / Tag tennis competition.

Three or more players are needed for this game. One person, designated as the “king” or “queen, ” goes to the opposite side of the court. The other players make a line behind the baseline of the current side. One challenger steps up and plays a singles point against the “king.” The point is started with either a serve or a drop hit. If the challenger wins, they replace the “king” on the other side of the court. Variations of this game include the challenger having to win two or three points in a row. This game practices playing a singles point.

Six or more players are needed for this game. An equal amount of players line up behind each baseline. One side is designated the chumps while the other is designated the champs. A player from each line steps up and plays out a singles point. The point is started with either a drop hit or a serve. The winner of the point goes to the end of the champs’ line while the loser goes to the end of the chump’s line. The game is played for a designated time, and once time is called, the players on the champs side are the winners. This game practices playing a singles point.