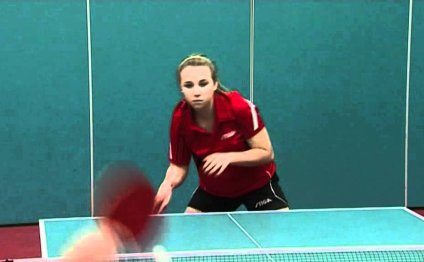 This stroke is the first forehand topspin stroke taught to the beginners. Offensive players use this stroke in order to prepare their next stroke, which is usually a fast forehand topspin or a smash. It is also used when the player wants to change the rhythm of the game. The nature of the stroke is such that it is difficult for the opponent to control the ball so he might not have the best returns.

The best distance for playing a slow forehand topspin is approximately 50-100cm (19.7-39.4in) away from the table. The knees are slightly bent with the left leg pointing forward and the right pointing towards the right corner of the table. The body weight falls forward (because the body is bent) and on the toes for quick movement. The right arm is slightly bent with the racket at the side and a little in front of the body, almost at waist level. The left arm is also bent for balancing reasons. As the ball comes towards the player, the backward movement of the right arm starts. At the end of the backward movement, the racket is at a 15-20cm (5.9-7.9in) distance to the right and below the right knee pointing downwards. The torso turns as the legs turn and bend. The body weight is transferred to the right foot, which at the end of the movement is bent at a 90° angle. The left leg is bent at a 120°-130° angle with the foot pointing slightly towards the right. The feet are far apart at a distance greater than a shoulders' width. The racket strikes the ball at a 70°-80° angle at the beginning of the ball's descent. During contact, the player makes a sudden short movement of the wrist. At the end of the stroke, the racket is in front of and over the head having thus made a counterclockwise trajectory. Power is given by the right leg and the body, so the ball will have a greater speed while the body weight is transferred towards the front and to the left.

On forums I keep hearing people ask, “What’s the best rubber or blade?” The reality is that there’s no such thing. While…

BASIC RULES OF TABLE TENNIS AS PER THE ITTF The Table The upper surface of the table, known as the playing surface, shall…