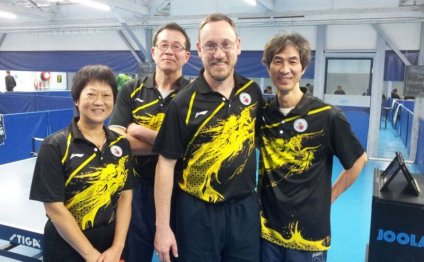 The 2015/2016 Summer Season resumes the week beginning Monday, 18th January 2016. Pictured with William Tay is Florian Holveck from France who played up until Christmas. It was a pleasure to have Florian play in our competition and to watch a player of such a high standard and excellent style of play. Florian has returned to France and we wish him the best in the future.

The TTSA Winter Pennant wrapped up last night at Woodville, overall it was a very successful night for the club. We managed to win the premiership in State League, Division 2 and Division 3.

Our Division 1 team also made the grand final, narrowly losing 6-5 in a great effort. Congratulations on a fantastic performance by all players.

School holidays junior group coaching sessions will be held from 10 am to 1pm on the Tuesday 14th, Wednesday 15th, Friday 17th, Tuesday 21st, Wednesday 22nd and Friday 24th April at the Adelaide Table Tennis Club. per Student per group session. Numbers are limited so please contract Kazue Brice on 0419 663 799 or kazuebrice@gmail.com to register.

Adelaide Table Tennis Club Summer Competition teams can be seen in the link below. The competition starts 7:30 pm Tuesday 16 September. If anyone has missed out on a place, they can still play as a reserve.

Adelaide Table Tennis Club Summer Competition teams can be seen in the link below. Please get in touch with Alan Herman on 0431 987 339 as soon as possible if you have any changes. The competition starts 7:30 pm Tuesday 16 September. If anyone has missed out on a place, they can still play as a reserve.

Australia’s Vy Bui emerged as the winner of the Girls’ Singles event at the Oceania Youth Olympic Games Qualification Tournament in Avarua, Cook Islands on Thursday 22nd May.

She looks forward to competing at the forthcoming Nanjing Youth Olympic Games, the table tennis events being scheduled to commence on Sunday 17th August and conclude on Saturday 23rd August.