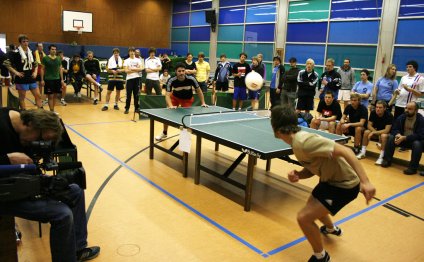 John Hilton (born 25 June 1947) is a retired table tennis player who sensationally won the single event at the Table Tennis European Championships in 1980 at odds of over 1000-1. His use of a revolutionary combination bat, with different rubbers on either side, completely bamboozled his opponents, coupled with his defensive play, and led to one of sport's greatest upsets.

Ultimately, the table tennis authorities had to change the rules because of Hilton, so that either side of a bat had different coloured rubbers. This gave the opposing player the chance to spot which rubber his opponent was using. Hilton used a bat which had black rubber (one side antiloop the other side very spinny) on both sides, meaning that opponents generally had no clue which rubber he was using when he 'twiddled' his bat in mid-rally, especially when his sleight of hand was coupled with him squeaking the soles of his shoes on the floor at the moment of bat on ball impact, this additional tactic masking the slight difference in sound between anti-loop surface and spinny surface.

Hilton still plays table tennis in the Bolton league which his team famously won in the 2012-13 season. John has won many Veteran titles and to date, is the only British player to have won the gold medal in the Men's Singles event at the Table Tennis European Championships.