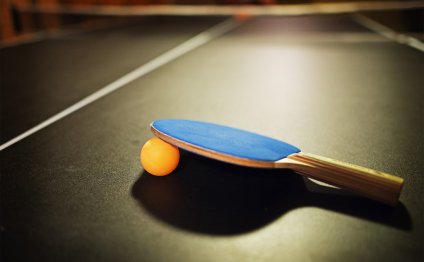 Ariel Hsing, 16, is the highest-ranked of the four players on the U.S. Table Tennis team traveling to London. It should go without saying that any one of them could destroy you in ping-pong. Hsing explains exactly how her sport is different from yours.

Footwork is paramount.
"You use your hands in ping-pong, " Hsing says, "but you use your feet to play table tennis."

"You hit a ping-pong ball, but you spin a table-tennis ball."
Hsing points out that ping-pong requires hand-eye coordination, as players tend to bat the ball in long rallies. Table tennis, though, "is a lot trickier, " as top players deploy topspin, underspin, sidespin or, trickiest of all, no spin – which can be a killer when you've been deceived into expecting spin.

"Ping-pong is cheap, and table tennis can be expensive."
Your average home paddle is a $5 job from Target, and it lasts a lifetime, versus Hsing's rubber, which costs $80 and she replaces every week.

Table tennis is best-of-seven games to 11.
Plus, the usual rally is much shorter than you'll see in the basement: "A typical rally is seven to nine balls. A really long rally is very rare."

It's bad form to skunk somebody in table tennis.
Hsing says that there's an etiquette "if you're up 10-0, you mis-hit a serve to be polite. But that's dangerous – people have been up 10-0 and lost.

You call it Ping Pong we call it Table Tennis!

Seattle — The city of Seattle is wondering if free ping pong in its parks may help stop crime. Cal Anderson Park in Seattle…

As early as the 1960s, KETTLER engineers were working on aluminium technology for table tennis tables, aiming to increase…