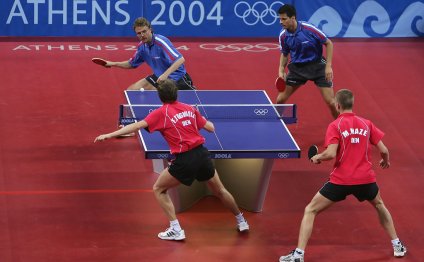 The past and the future of table tennis in the United States was on full display at the U.S. Olympic Team Trials for Table Tennis this week in Greensboro, North Carolina, where a mixture of teenagers and experienced Olympians came out on top.

After three one-day tournaments, six athletes who range in age from 13 to 42 prevailed and will join 2015 U.S. nationals winners Jiaqi Zheng and Yijun Feng in representing the U.S. at the North America Olympic Qualification Tournament in April in Markham, Ontario. At that event, as many as two U.S. men and one U.S. woman can qualify by name for the Rio 2016 Olympic Games, joining Yue "Jennifer" Wu, who earned her spot in Rio by winning the 2015 Pan American Games.

Here’s a look at the six athletes who won Olympic Trials:

Chen Wang: Chen Wang has gone further in Olympic table tennis competition than any other American. She reached the quarterfinal round at the Beijing 2008 Olympic Games, ultimately finishing tied for fifth. Wang retired after the Beijing Games, but returned to the sport in August. Now 42 and a mother to 4-year-old son Ryan, Wang’s comeback proved successful when she won the first day of competition in Greensboro.

Timothy Wang: Timothy Wang was Team USA’s sole male table tennis competitor at the London 2012 Olympic Games, where he went out in the first round of play. Wang has been on the past four world championships teams, and won the 2012 and 2013 national championships. Last month, he moved to Atlanta to train under former NFL player Corey Bridges. Wang, 24, won on the first day of trials.

Sharon Alguetti: Sharon Alguetti lost to Timothy Wang in the final of the opening day of competition on Thursday. He made sure to take advantage of his next opportunity to qualify for the tournament in Ontario by winning Friday’s final. Alguetti is 14 years old and competing in his first year as a senior. He finished second at the junior nationals in 2014. Sharon’s older brother, Adar, and twin, Gal, also play table tennis. Sharon Alguetti was the Day 2 winner in Greensboro.

Crystal Wang: Crystal Wang could easily be Team USA’s youngest competitor at the Rio 2016 Games, should she qualify in two months. Wang is 13, which would present an issue in many sports, but table tennis does not have age restrictions at the Olympics. At age 12, Wang was the only woman in the 16-person field at the Grand Final of the North American Table Tennis Tour. last year. On the final day of the tournament in Greensboro, Wang defeated fellow teenager Angela Guan.

Kanak Jha: Kanak Jha joined Sharon Alguetti, Crystal Wang and Lily Zhang in the group of teenagers advancing out of Greensboro and on to Ontario. Jha, only 15 years old, has been one of Team USA’s top table tennis stars for the past few years. In 2014, he won the North America Cup. Then, a few months later, he competed at the World Cup as the youngest participant ever. Jha made the Pan American Games team in 2015. Jha overcame 2014 Youth Olympian Krishnateja Avvari in the last final of the three-day Olympic Trials.

To purists, it s called table tennis,but to generations of suburbanites who grew up playing it in their basements, it s…

Table tennis is a very popular sport that is played all over the world. Millions of people engage in amateur play every year…