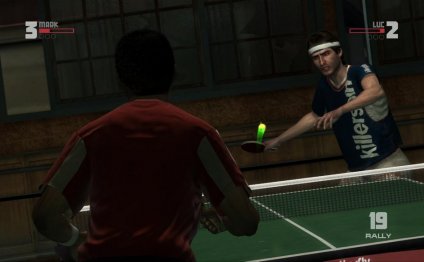 They've done it by taking a game which was great on Xbox 360 and making it great on Wii. Table Tennis surprised many people when it first turned up, and not just because it wasn't full of murder. It was simple, but well designed, combining brilliant gameplay with pleasing visuals and sponky music. It didn't offer a dozen modes or hours of fun for the solo player or billions of options for choosing the colour of your character's eyelashes, and it was priced accordingly. And, as Tom reported, it was great fun.

Sensibly, they haven't mucked about with much other than the controls for the Wii version. Liu Ping, Jesper, Kumi and all the others are back, the venues are the same, the music is just as sponky. As you'd expect the graphics aren't quite as shiny and detailed as those in the 360 game, but the clean, contemporary visual style is still there.

So to the controls. A sports game like this might seem like an obvious fit for the Wii, but it can all go horribly wrong if the control system isn't right - see Brunswick Pro Bowling for details. Luckily the one in Table Tennis Wii works perfectly.

Unsurprisingly you swing the remote to wave your bat about. Serving is done by swinging the remote up, then left or right when the little black bar reaches the top of the coloured meter. Pressing the various directions on the d-pad adds various types of spin. You press the A button for a soft shot, B for a focus shot. And you charge up your shots by holding down the spin button as early as possible.

Apart from the serving bit, you won't probably won't need to explain any of the above to someone picking up the remote for the first time, even if they've never played the 360 version. Or any games at all. You don't even have to worry about moving your character around the table; this is done automatically, and effectively. It's all perfectly intuitive and easy to grasp.

Things might not look quite as crisp as in the 360 version, but it's still a very nice looking game.

But for those who prefer to do a bit more work, Rockstar has included two extra control system options, which make use of the Nunchuk. Select Control Freak and you can use the analogue stick to move your character around yourself. Alternatively there's Sharp Shooter - this time, the stick directs the placement of the ball.