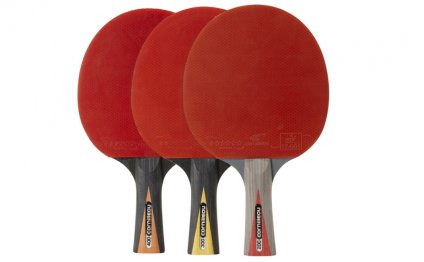 A game of headis, a mix of table tennis and football, is played in front of a small but enthusiastic gallery

It is made out of rubber and has special bouncing qualities. Volleys are allowed as well as touching the table. A game is made up of two sets each to 11 points, and just like table tennis the set's winner must be leading by two points.

This video shows competitors from near and far gathering on Saturday in the German town of Unna to take part in a tournament.

A headis player used her hands for balance, an important element in the game that is fast catching on

A competitor in a headis tournament in Unna, Germany, shapes to play his shot with his head

The game is serious stuff - players launch themselves at shots, leaping onto the table in the hope of winning the point.

It is now part of the sports programme in at least 15 universities in the country, and is creeping into the Czech Republic educational establishments.

Headis is popular on the university circuit in Germany, and is creeping into Czech Republic too

As with any game, there's winners and losers; here are the victors from the Unna tournament

Speaking to the Wall Street Journal in September, Wegner said: 'In the beginning, people were like, what are you doing, you idiots?' recalled Mr Wegner.

But with a recent tournament attracting 100 competitors, being named a finalist in the international sports industry start-up competition and setting up a company in the headis name, this is one game that could certainly catch on.