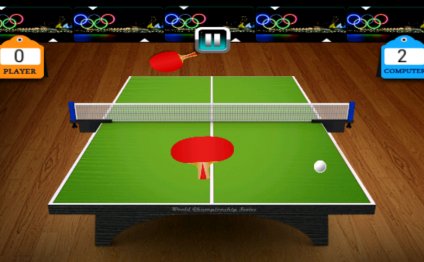 Here, at GameDuell, we like doing sports. We jog, we do back training and yoga, we play volleyball and we love table tennis. In fact, GameDuell has a serious case of table tennis obsession – nearly everybody in the office has already caught a table tennis bug, so you can hear people fling the ping pong ball every single day.

This infatuation has reached its peak yesterday, when the world witnessed the 2nd Annual GameDuell Table Tennis Masters Tournament.

That night, there were 16 participants and around 50 people in the fan base. The tournament began with the warming-up, where the opponents could practice their skills for one last time before the table tennis battle began and the audience could pick up their favourites.

After that, everybody took a small pizza break, which wasn’t THAT small, really – pizzas of all different types and tastes were rolled out on the kitchen table, taking all over the space.

Together with some drinks, however, they disappeared pretty soon, leaving everybody “satt und fröhlich”. Once there finally was enough courage running through everybody's veins, people moved back to the table tennis court.

The stakes were raised high, as some of the participants are vigorous table tennis players, who take the sport very seriously (our Big Data scientist, Sadegh Jokar, for example, is a winner of numerous awards at Tegel Open, the International Table Tennis Tournament). Such level of professionalism also made the game super fierce: the atmosphere was heating up with every loss and every win, and everybody got high-strung nerves.

But it was the game first semi-finals that were the most intense part of the night. The two semi-finalists, Falco Kübler (Community Manager) and Rui Campos (Game Developer), were fighting for life and death: the score was at 2:9, and it seemed that Rui would be an obvious winner, when suddenly Falco used his secret moves, equaled the score to 11:11, and wrested victory from jaws of defeat.

In the end, Falco won the final trophy from the other semi-finalist, Julián Mancera, our Android Developer, and became the righteous Master of the 2nd GameDuell Table Tennis Tournament! Meanwhile, Janis Bode (Head of Agile Project Management) earned a well-deserved third place.

Origins of Table Tennis As most would imagine, Table Tennis is based on Tennis - the only slight question might pertain to…