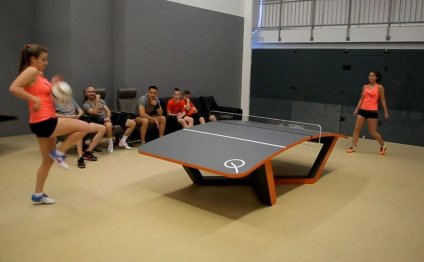 Ping pong has become somewhat synonymous with global startup ‘culture’ today. In fact, entire movements have been launched because of the deep connection between the startup world and our love of ping pong – organisations and meet up groups like Startup Ping Pong and the San Francisco Ping Pong League hold regular tournaments across the Silicon Valley tech ecosystem; Each player serves two points in a row and then switch server and Austin based SXSW holds an annual tournament as part of the Startup Village arm of its Interactive Conference each year. All capital cities in Australia have also held informal get-togethers around ping pong tables over beer and pizza in various co-working spaces. River City Labs took this one step further last year hosting the very first Brisbane Startup Ping Pong Battle. Scoring: Table Tennis: Score ends at 11 points with a difference of at least 2 points difference between the two players. Odd number of games to per match, in tournament, usually best of 5-7 games per match. Score ends at 15 and is defined by the first person to reach 15 points. So a final score of 15-14 is a winning score. There is a special "double-point ball" that can be used once per match when serving, and it gives 2 points to the serving player if won, and 1 point to the receiving player. It is white instead of orange to mark this occasion. All matches at World Championship 2016 are best of three games, race to 15 points, except the semi-finals and the final which is best of five sets. Equipment The paddle should have a red and a black side Ping Pong: Table Tennis - many variations - each person has their own customized paddle with some specification of sameness, in particular size. Surface is usually sticky rubber. Ping Pong - standard paddle used by all. Sandpaper is the surface which limits very much the spin potential. I couldn't find anywhere the details of the specification of this paddle, or an explanation of how it behaves differently from a typical table tennis paddle. I was shocked to discover that even Wikipedia doesn't cover this form of Ping Pong.

2.6.2 The server shall then project the ball near vertically upwards, without imparting spin, so that it rises at least 16cm…