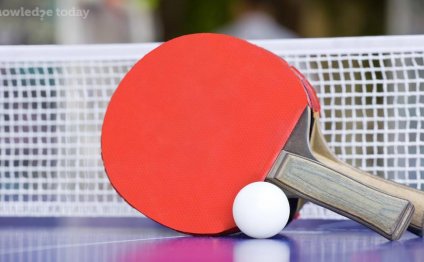 2.6.2 The server shall then project the ball near vertically upwards, without imparting spin, so that it rises at least 16cm (6.3 inches) after leaving the palm of the free hand and then falls without touching anything before being struck.

The above Law ties in with Law 2.6.1, in that it specifically states that the ball shall be thrown up without imparting spin on the ball.

The requirement that the ball must be thrown up at least 16cm after leaving the palm of the free hand has a couple of consequences, one being that the ball must go up at least that distance, so simply moving your free hand up high and allowing the ball to drop more than 16cm is not allowed. This is why the bottom right service method in the diagram is illegal, since the ball has not risen more than 16cm, even though it is allowed to fall more than 16cm before being struck. Note, however, that provided the ball does get thrown up 16cm, it does not have to fall the same amount before being hit. If the ball has been thrown up the required amount, it can then be struck as soon as it starts falling (but not before, as I discuss on the next page).

The requirement that the ball must be thrown near vertically upwards often is interpreted differently by different umpires. Some players will also argue that a ball toss of around 45 degrees to the vertical is "near vertical". This is not correct. According to Point 10.3.1 of the ITTF Handbook for Match Officials, "near vertical" is with a few degrees of a vertical throw.

10.3.1 The server is required to throw the ball "near vertically" upwards and it must rise at least 16 cm after leaving his hand. This means it must rise within a few degrees of the vertical, rather than within the angle of 45° that was formerly specified, and that it must rise far enough for the umpire to be sure that it is thrown upwards and not sideways or diagonally.

This is why the service shown in the bottom left of the diagram is considered illegal - it is not a near vertical ball toss.

Table Tennis - Return of Serve with Long Pips and Antispin ...