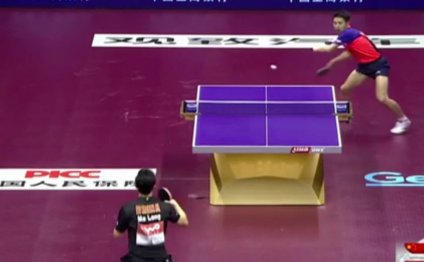 Jeopardy!Had Watson and chess had Deep Blue, so it was time for ping-pong to face a formidable opponent in technological form. The incredibly quick KUKA robot, normally used in manufacturing, squared off against a top ping-pong player—and performed really well.

Timo Boll is currently ranked eighth in the world for table tennis, but has held the No. 1 spot. For the opening of KUKA's new Shanghai robotics factory, he came on to endorse KUKA and play the robot in ping-pong. According to the (incredibly overproduced) video, it was a super-intense match. Boll had to play hard to beat the KUKA 11-9 in a match for the ages. Or at least it looks like it in the video—who knows how much of that was planned.

Though the music and the lighting are slightly over the top, it's still pretty awesome to watch a robot and a human play a professional-level game of table tennis and make it look natural. KUKA's video is definitely absurdist, but also self-deprecating in a cool way. At the end the screen reads, “Not the best at table tennis, but probably the best in robotics.” Solid humble brag.