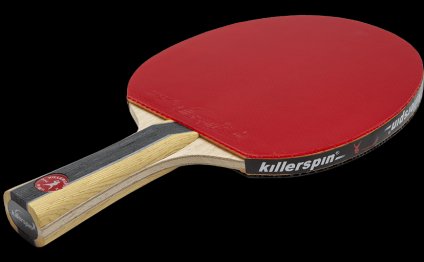 The pimples are facing out and are part of the playing surface. They are generally very fast but the ability to impart spin is less than Pimple In rubbers. Short pimple rubbers are used by speed players that play a fast attacking game close to the table.

The pimples are facing out and are part of the playing surface. The pimples are longer which decreases speed and causes spin reversal on contact of the ball to the rubber. The pimples 'flex' under the balls weight and pressure and they produce deceptive returns that are difficult to read and respond to. Long pimples are often used by defensive players who require the control and spin reversal.

Pimples facing in with practically no surface grip. The lack of grip makes anti-spin an ideal choice for receiving heavy spins and powerful hits. However, it is practically impossible for you to generate any ‘real’ spin using anti. The spin that your opponent imparts is effectively reversed or removed when you return it - hence the name "anti-spin". Many Anti-Spin rubbers also absorb a lot of the pace of the ball, which can disrupt the rhythm of the opponent’s game. These rubbers are often used in combination with a spinny pimple in rubber to provide a huge contrast between the shots played with the different sides.

Table Tennis rubbers come in either red or black. Which colour to use on either backhand or forehand is down to personal choice but many top professional players use the black rubber on their forehand side.