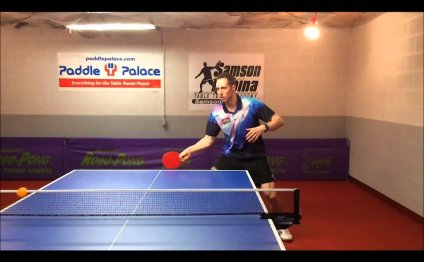 Serve return is one of the most challenging aspects of table tennis. Many players have a very difficult time returning high quality serves, and as a result lack confidence in their decision making and execution. Today, we’re going to go over some tips that will hopefully help you improve your serve return game and change your approach to becoming a more effective returner.

1. Practice against as many different serves as possible. This includes players who may not be up to your level but have effective serves. Playing practice games against different players while focusing on making few mistakes on serve return is a good foundation for improving your serve return.

2. Learn to judge spin through the flight and bounce of the ball in practice, not just from watching the opponent’s ball contact. The opponent may have a highly deceptive contact point and motion or may have an illegal hidden serve that you need to adjust to, so being able to judge the flight of the ball, watch the label of the ball, and judge the bounce of the ball are far more valuable assets than being able to see the ball contact. As a rule of thumb, a serve that floats through the air and stops sharply after the second bounce is likely heavy underspin, while a serve that cuts through the air more quickly is more likely nospin or topspin. A nospin serve will bounce regularly on the second bounce, while a topspin serve will kick forward.

3. Be prepared first and foremost for fast, deep serves. Being beaten by these types of serves kills confidence and momentum, and allows the opponent free points without having to work hard. Shorter serves are slower and therefore allow you more time to react.

4. If you are having lots of trouble judging the spin on the opponent’s serve, take the ball a little bit later to give yourself time to see what the ball is doing on the second bounce as discussed previously. Give yourself some margin and don’t try to make a perfect return. This is especially important early in the match if you aren’t familiar with the opponent’s serves. It is also very important on drop shots, since drop shots are very difficult to control if you try to push the ball too flat. Learn to give your serve returns some margin while keeping them low enough to make life difficult on the opponent.

5. If you are able to read the spin on the opponent’s serve, be decisive in terms of how you plan to put yourself in an advantageous position. You can do so using timing, placement, spin, and/or pace. Trying to receive with pace is the riskiest of these options and should be used sparingly. A combination of timing and placement, and spin is low risk and most effective. For example, using a backhand banana flip to the opponent’s middle is a good combination of spin and placement, while a quick push or drop shot off the bounce wide to the opponent’s forehand is a mix of placement, timing, and spin. As the match progresses, finding which of these factors gives the opponent the most trouble will allow for more effective returns. Some opponents have trouble with heavy backspin or sidespin, while some opponents can deal with heavy spin but are not quick enough to deal with quick, well placed returns even if there is not much spin on the ball.

6. Focus on footwork on the serve return. This was covered in a previous article on serve and receive footwork.

7. Be ready for seemingly short serves that leak half long, so that the second bounce is off the end of the table. These serves are very difficult to drop shot or flip since they are actually coming long, and trying to drop them often times causes a lot of errors and pop ups for the opponent to attack. A good way to deal with these serves is to be able to feel that the ball is coming long after stepping in to receive a short serve, then either quickly turning the body to execute a forehand loop or using a backhand loop over the table. The forehand loop is easier to execute in this situation, which is one reason why returning the majority of short serves with the forehand is preferable unless you’ve decided to try to backhand flip. Being in position for the forehand allows you to quickly adjust to a half long serve and attack with the forehand.

8. Try not to telegraph your returns. What this means is that you can decide on how you’re going to return the serve without giving any hints to your opponent until the last minute. If you know you’re going to forehand push, don’t extend your arm and open your racket until the last minute when you need to do so to execute the shot. Instead, get in good position to receive the serve but keep your racket in its normal ready position. Similarly, if you’re going to flip, don’t give the fact away by preparing your racket to flip until you absolutely need to prepare to contact the ball. The more consistently you can make all your serve returns look until the last split second, the more difficult it is for your opponent to guess what’s coming and prepare accordingly. This of course also means that you should change the placement, spin, and timing of your serve returns sometimes to keep the opponent off balance.

2.6.2 The server shall then project the ball near vertically upwards, without imparting spin, so that it rises at least 16cm…

Table tennis is a great physical sport that can get you in shape and vastly improve your hand-eye coordination. It is a sport…