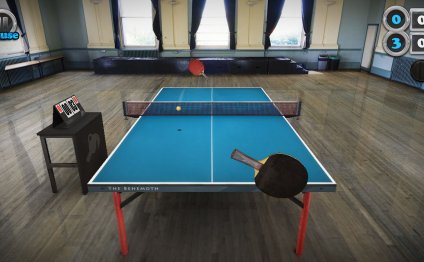 Spin is an essential component of an advanced game. Spin influences every aspect of the players' interaction with the ball. Not to mention the satisfying feeling you get when your side spin makes the ball curve just outside of your opponent's stroke.

When learning how to apply spin to the ball, at first the ball is likely to go everywhere but on the table. It is absolutely imperative that you keep trying. The originating author of this Wikibook made the mistake of giving up on top spin while his friends kept trying. He laughed as he beat them easily, since they were (unsuccessfully) trying to apply top spin. However, once they mastered it, he was unable to stop the onslaught of fast, curving balls, and had to play catch-up.

There are seven types of spin, which makes sense, because there are three axes of motion (forward/backward, left/right, up/down) and no-spin, which can have just as much effect on an opponent as a spun ball. The other six are: Top spin, slice, left side spin, right side spin, left corkscrew spin, and right corkscrew spin.

Understanding how spin works is important. Knowing why spin makes balls curve and jump and seemingly stop helps when implementing it. Spin actually makes the ball behave like an aircraft's wing. Take slice (backspin), for example. Sliced balls seem to float through the air and never bounce as much as a regular (no-spin) ball. This is because the rotation of the ball makes air move over the top of the ball more quickly than the air on the bottom. The slower moving air is at a higher pressure than the faster moving air above the ball. When there is a difference in pressure, high pressure air tries to move into low pressure areas, so the pressure difference imparts lift on the ball. This pressure difference is responsible for the behavior of all spins. When the ball hits the table, it is spinning backwards, so when it grips the table for a moment, that backward rotation is applied to the table and it seems to not bounce as much. Advanced players can apply slice with such energy that the ball will jump backwards when it hits the table.

Top spin is the bread and butter of most advanced players' strokes. Just like in tennis, top spin in table tennis causes the ball to curve downwards. This allows players to impart considerable power to the ball, but instead of soaring off of the table, it will curve down and strike his opponent's side.

Top spin is applied by forcing the ball to spin end over end in an upward manner relative to the player who hit it. In other words, if you hit the ball with the label pointing straight at you, you would see the label move from the bottom of the ball to the top of the ball, and it would not move from left to right. This can be done with several strokes.

One way to impart top spin is to add a wrist flick to the standard stroke. This is a good, basic way to start.

An alternative to the above stroke is to push the ball. Instead of bringing the paddle back towards the body when finishing a stroke, a player would continue the forward movement, so that the paddle only moves in one direction, forward. This stroke has the advantage of being more easily learned for the backhand, which is more difficult with the other strokes.

Some players choose to only flick their wrists upward when hitting the ball. This has the advantage of being able to impart an insane amount of spin without hitting the ball extremely hard. However, it is also one of the more difficult ways to do it.

Slice, also known as backspin, is a powerful spin and can easily catch an opponent off guard. Sliced balls seem to float through the air, and never bounce as one would expect. The degree of spin affects what the ball will do when it hits the table. With less powerful spin, the ball will not bounce as far as a no-spin ball. With more powerful spin, the ball will either bounce straight up or backwards (toward the player who imparted the slice). However, it becomes more difficult to get the ball to hit the other side as the amount of slice imparted increases, since the more slice the ball has, the more it floats. When first learning slice, don't be surprised when most of your sliced balls float right off the end of the table. With practice you will gain control of the slice beast.

Almost all methods for imparting slice involve getting the paddle either entirely beneath or mostly beneath the ball and striking it so that it runs along the paddle while the paddle moves away from the player. Slice is called slice because the stroke it uses, for lack of a better word, slices at the ball. If correctly done, the label on the ball will move from top to bottom, and not left or right. if you hit the ball from the top the ball will go back up ward toward to you

Side spin is very versatile. It is quite possible to use side spin on every shot in a rally and remain competitive, which is much harder to do with top spin and slice. Also, strokes for side spin are much easier to learn. The only action required is moving the paddle laterally when hitting the ball. When correctly done, the label on the ball will move either from left to right or right to left with no up or down movement. There are two methods of imparting side spin.

Push side spin results from moving the paddle laterally away from your body when hitting the ball. Push side spin doesn't require you to impart as much speed to achieve the same amount of spin as pull side spin. The risk you run with push side spin is that you can hit the ball with the leading edge of your paddle instead of allowing it to glide across. The ball whizzes off with no hope of hitting anything but a spectator or wall.

How To Do Side Spin In Table Tennis

This stroke is the first forehand topspin stroke taught to the beginners. Offensive players use this stroke in order to prepare…