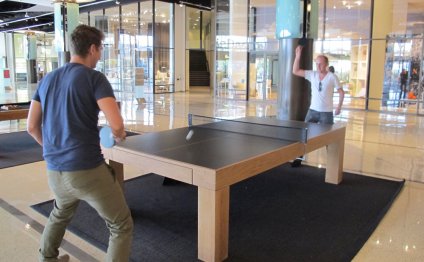 In the latest high-def video filmed on board the International Space Station, record-breaking astronaut Scott Kelly celebrates his 300th day in space by playing ping pong with a liquid ball, and two water-repellent paddles. Just imagine the possibilities if that liquid ball was made from beer...

So how does the game work? As Kelly explains, he's using hydrophobic - or water-repellant - paddles to bounce around the water droplet, making it look as effortless as if he was volleying a regular ball back and forth.

The paddles are made from polycarbonate, and they're able to repel water so strongly thanks to two features: laser etching has covered them in super-tiny lumps, plus they've been spray-coated in Teflon. For those of you who don't know what Teflon is, go and check out your kitchen cupboard, where it most likely coats your black, non-stick pans.

The combination of Teflon's non-wettability (yep, that's a word!) with the paddles' surface roughness makes them able to actively prevent water molecules from sticking to their surface - or in other words, makes them super water-repellent.

But why does the water droplet stay intact as a perfect ball, rather than being splattered around the space station when hit with the paddle? As NASA's Johnson Space Centre explains, it all comes down to droplet size and surface tension.

Ping pong, table tennis or whatever else you wanna call it…we all love a game once in a while, but sometimes don’t have the…