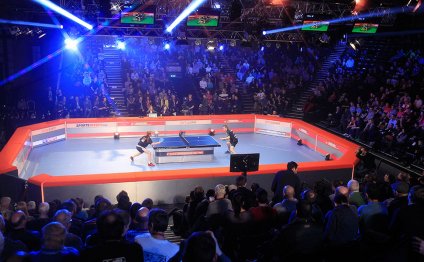 Table Tennis has always had a surprising side. Back in the 1970s, the “Ping Pong diplomacy” between USA and China paved the way for President Nixon’s historic visit to China. More recently, fans of Blur will know that the pop band always tour with their own table, and Academy Award winner Susan Sarandon, has opened a popular table tennis social club, Spin, to indulge her passion for the game. Table tennis looks set to become the talk of the town.

The International Table Tennis Federation (ITTF) is delighted to hear about Table Tennis’s growing hip reputation. Their aims are to promote the sport, build up fans and players in regions where it is less well known, and encourage younger generations to take up the sport.

This means that, unlike other sports associations that are only responsible for governing the rules of the game, ITTF is responsible for growing, teaching and managing table tennis. “Our job is to show table tennis is a fun, exciting game that everyone can enjoy, ” says Steve Dainton, Head of Marketing for ITTF.

The world of table tennis has been dominated by a few countries that have achieved international success. The challenge for ITTF then, is to develop the sport in other markets.

ITTF is focusing on building up the tournament and reaching out to new audiences. “We started promoting table tennis tournaments later than our fellow sports associations and we definitely have some catching up to do, ” says Dainton. In order to improve their media reach, they have included more international stops on their international tournaments and increased prize money to make it more exciting. As a result, there has been an increase in public awareness.

A successful example is the Oceania Cup. It started three years ago in Australia, New Zealand and Fiji where there was very minimal TV Broadcast coverage at the beginning of the tournament. “Recently, there has been live streaming of the events as well as a growing interest in the sport in these markets. We analyzed the TV media value of this tournament and it was worth over half a million US dollars, ” says Dainton.

The ITTF believes that traditional PR is still the most effective way to generate publicity for mass audience reach. As a sports federation, funding and resources are always a concern, particularly when they are responsible for demonstrating the value of sports marketing to their sponsors.

To benchmark the ROI, the ITTF uses Meltwater’s online media monitoring services to keep track of the events’ media mentions and calculate their events’ media values. This helps ITTF and its sponsors evaluate investment in various media channels and outlets.

“Meltwater has been helpful in pointing out what we don’t know! Knowing which media sources we are not covering will help us to better understand our media landscape and reach out to media sources that are less familiar to our sport, ” says Dainton.

Engaging with Fans on Social Media

Going into the new table tennis season, Dainton says they are going to invest heavily in social media platforms such as Facebook, Twitter, Youtube and Flickr. Social media provides a new avenue for ITTF to interact with its fans. ITTF put snippets of the tournaments onto YouTube for its fans to review. These videos have received a lot of views and positive comments from the public. “We are just starting out in social media and the ability to interact with fans is definitely promoting table tennis to new audiences.”