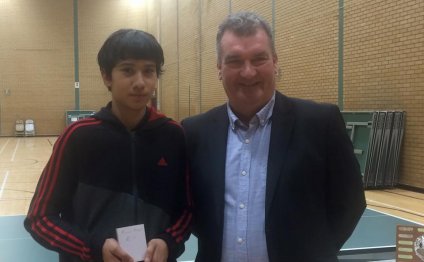 Usain Bolt has the 'lightning bolt' while Mo Farah has his trademark 'M'.

Now table tennis player Gavin Rumgay has joined the list of athletes with famous celebrations - after showing off his pants at the Commonwealth Games.

The Scottish number one pulled up his trousers to reveal his stripey underwear after winning a crucial point against Canada's Pierre-Luc Theriault yesterday.

Scroll down for video

Celebration: Table tennis player Gavin Rumgay pulled up his shorts and showed off his pants after winning a cruical point during his enounter Canada's Pierre-Luc Theriault

The pair were up against each other during the qualification round of the men's team event.

He struck the 'mankini' pose after winning the point after a vital rally in the fifth game, prompting a huge cheer from the home crowd and a laugh from the commentators.

Despite losing the first two games, the nine-time Scottish champion went on to win the encounter, sparking more wild celebrations.

To celebrate the victory, he started rolling around on the ground before leaping up to dance to The Proclaimers' song 'I would walk 500 miles'.

His coaching staff were more tame in their celebrations, standing arm-in-arm as the player ran around the playing area.

Rumgay's win against Canada gives the Scotland team a chance in topping their qualification group.

Unexpected: He started the huge celebrations after coming back from two games down to win

After showing off his pants he fell onto the floor and began rolling around, he then jumped up and started dancing to The Proclaimers song 'I would walk 500 miles'

Spin is an essential component of an advanced game. Spin influences every aspect of the players interaction with the ball…

BATTS was formed at Burnt Mill School in Harlow in 1994, after use of a small church hall became inadequate. In 2005, we…