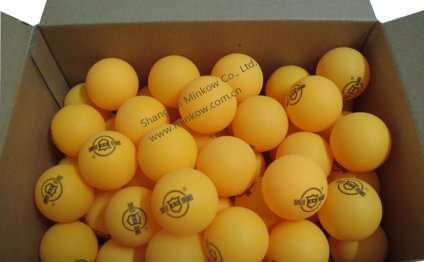 Here I copy it (source at bottom):

Ping pong balls are made of celluloid, which is the same material from which photographic film is made. No, it is not considered a true plastic. Celluloid is a composition of nitrocellulose and camphor.

A flat sheet of celluloid is soaked in hot alcohol until soft. It is pressed into a hemispherical mold, trimmed along the edges, and allowed to harden. The hemispherical mold produces a half a ball. Two halves are matched together to produce one whole ball. The two halves must be exactly the same weight. The halves are perfectly aligned and glued with an alcohol-based adhesive. The balls are then put into a machine that agitates them to smooth the seams. The finished balls should not have seams that can be seen or felt. The grading of ping pong balls depends on the smoothness of the seams, and if the seams can be felt then the ball is not suitable for play and will usually be sold for other purposes.

Read more: Please explain in detail how a ping pong ball is made - the - JustAnswer

The ping pong ball diameter was 38 milimeters in diameter and, starting in 2001, after the 2000 summer Olympic games in Sydney; Australia, the previous year, that was changed to 40 mm and 2.7 grams of weight ?. The reason: to allow players longer shots and, specially, to have a larger ball to allow TV cameras to track it with more ease.

There was a huge controversy due to this change because it was said that the change gave non-chinese players a leverage because of the physics and dynamics of the ball, with the new measurements being different than the previous ones (new, 40 mm, balls are slower than old sized ones).

The new weight and diameter of 40 mm stuck to this day.

Color of the ball varies, from white to orange and even other colors have been found. The color is choosen according to the table color, in order have contrast and make the ball easy to see as well.

Ping pong balls are graded with stars, being a 3 star ball, one of the highest quality and thus are the ones used in tournaments, down to 2 stars, 1 star and even balls with no stars at all, which are the ones used for non relevant table tennis gaming, practice, child games, schools, etc.