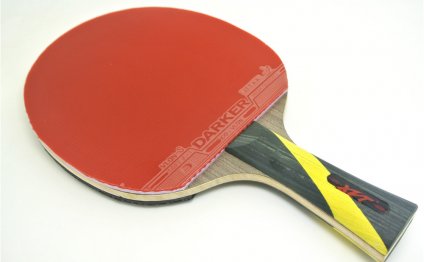 Rated 3.4 out of 5 by by ToxicChili Played well to start with, but poor quality. This bat looks nice and played surprisingly well when first used, but the rubbers came away from the bat after a few uses (I had to reattach them) and have deteriorated quickly. After a month of average use it had pretty much fallen to pieces. I have a cheap Dunlop bat that has lasted longer. Very disappointed. I contacted Stiga regarding this and they didn't even respond. May 22, 2015

Rated 4 out of 5 by kwildbur Good Racket - Bad Color The racket itself is nice but I was hoping that the blue color would actually be more blue like in the picture. It's more of a teal-ish color than the nice blue. August 15, 2014

Rated 3 out of 5 by Blah Don't feel its worth it Sure it has a cool color, but for what you get for the money, its just not worth it. Get the Hammerlite which is just $5 more. Its got a better feel and is worth the extra 5 bucks. September 30, 2013

Rated 5 out of 5 by Uncledrew Awesome paddle I love this paddle feels great in the hand it's a perfect weight April 23, 2013

Rated 5 out of 5 by Dave Fast and light! Pleased with this paddle. The color is really cool and the control and speed are balanced well. They could have done a finer cut on the surface material on the sides, but overall a great paddle! April 16, 2013

Rated 1 out of 5 by Pjm Broke first time This paddle fell apart the first time it was used. Pretty bad for a paddle this expensive. March 12, 2013

Rated 3 out of 5 by pojo Non-standard colors Keep in mind: international rules require one side of the paddle to be black and the other red. This allows opponents to know what spin to expect from each side of the paddle. With these weird colors, you will look weird if you play at semi-serious ping pong outings. January 29, 2013