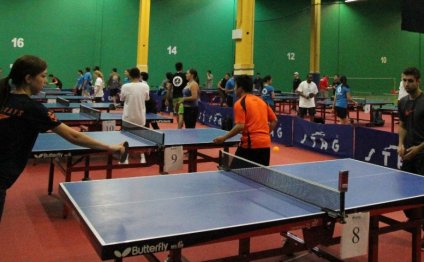 The Championships will be held from 24 April to 1 May 2006 at the AWD-Dome in Bremen.

(Information subjected to change if necessary)

The Championships will be conducted in accordance with the current Laws of Table Tennis, the
Regulations for International Competitions and the Special Regulations for World Championships, as
modified or complemented by the enclosed information sheet.

The following equipment from Donic, Tibhar and Gerflor will be used:
Table, net and post: Tables: Donic Formula SC and Donic Centre Court tables
Nets and post: DONIC Stress
Ball: Tibhar *** white
Flooring: Gerflor (Framboise color)
All racket coverings must be of a type currently authorized by the ITTF.

The Championships will be open to teams nominated by Associations whose membership
subscriptions have been paid up to and including those for 2006 (see Regulation 4.1.3).

The intention to enter players will be notified to the Bremen Organizing Committee (BOC) and
the ITTF in the preliminary notification form. The closing date for the receipt of this form is

Entries must be submitted on the prescribed entry forms. One copy of the Summary of Entries,
List of Official Party, Nomination of Delegates and Entries for Events 1 and 2 must be sent to the
BOC of the 2006 LIEBHERR World Team Table Tennis Championships to arrive not later than

On-line entry forms on ITTF web-site
Entries could also be done on-line instead of the regular process. Starting 1st November 2005 all
the Associations can submit their entries on-line, on the ITTF web-site, through the following URL
address: Each Association will receive an Association code and password to access the on-line entry system.

Entry fees in Euro must be transferred to:
Account Holder: WM 2006 GbR, Bank address: Frankfurter Volksbank, Triftstrasse 14, 60528 Frankfurt,
Germany, BIC: FFVBDEFF, IBAN: DE not later than An acknowledgment of the receipt of entry forms will be sent by e-mail or airmail. If this
confirmation has not been received within 21 days after the submission of entry forms, either the
Organizing Committee or the ITTF should be notified by phone, fax or e-mail.
An Association may nominate up to 5 players and a non-playing captain for each team event;
if a non-playing captain is not appointed one of the team players shall be designated as captain.

10 COPY OF PASSPORT AND PHOTOGRAPHS
Copy of passport and two photographs, 4cm x 3cm (vertical and horizontal), of each person named
on the List of Official Party must be sent to the Organizing Committee with the Entry Forms to
facilitate the issue of Accreditation Cards on arrival in Bremen. The relevant persons name should be
written on the back of each photograph. Associations could send the photographs of each person on
the List of Official Party also by e-mail to wttc2006@tischtennis.de

11 OBLIGATIONS
The entry forms will contain a statement that teams and players nominated are willing to compete
against any other participating team and player. This statement must be signed by a responsible
official of the nominating Association and no entry form will be accepted unless such an
undertaking has been given.

13 DRAW
The draw will be made, under the supervision of the ITTF Technical Committee, in Bremen

14 JURY MEETING
The Jury will meet with Organizing Committees representatives, Referees and Team Managers in

15 UMPIRES
All matches will be controlled by qualified umpires, in accordance with the Directives approved by

Overview: The Stiga Pro Carbon Table Tennis racket is a premium racket that advanced to expert level players should purchase…